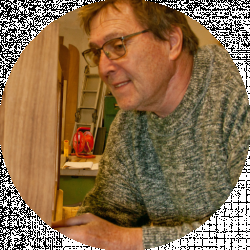 Will changing the propeller on your boat make a difference to the performance? Here we will go through the effects of changing a propeller from one pitch length to another.

To find out why this is so and the other implications of changing the propeller’s size, let’s dive into the world of basic hydrodynamics.

What Do the Numbers Mean?

Propellers spin and cause the boat to move ahead or astern. It depends on the direction of rotation. Here we will go through what the differences are between a twenty-one and a nineteen-inch propellor. Just so we start off on the correct footing, the numbers refer to the propeller’s pitch and not the size. So what exactly is the pitch? Well, let’s get that out the way first.

We have to start in the realm of the ideal. In a perfect world, a propeller behaves like a screw. And it is the distance between the individual threads of the screw that determines the pitch.

So if you mark a spot on the thread of a screw and call that position ‘A’ and then rotate the screw one revolution, it is the distance the spot has moved from spot ‘A’. In this case, it would be the distance measured in inches.

The pitch is the measurement of the distance the screw would move if the thread made one revolution through a solid medium.

The Influence of Propellor Pitch 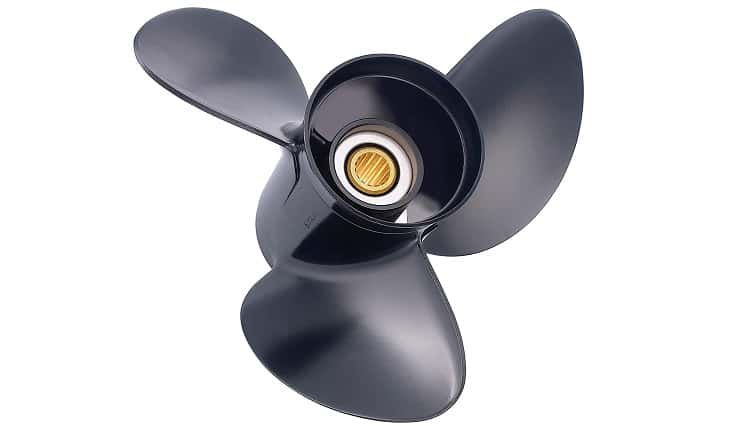 If you need to improve your boat’s acceleration, the easiest way to do this without changing the engine is to fit a propeller with a shorter pitch. So moving from a twenty-one-inch propellor to a nineteen-inch propellor is going to get your boat moving a lot quicker.

That is the good news, but, like so many things, there is a price to pay, and in this case, the price is the reduction in top speed and an increase in fuel consumption.

In order to move a boat from point A to point B, the propeller will have to rotate several times. At this stage, let’s stay in the realm of ideal and ignore all the annoying contaminants to our theory.

For our example, we want to move from A to B a distance of fifty yards which conveniently happens to be 1800 inches. In an ideal world, this would mean the propeller would have to rotate 95 times to get from A to B if we had a nineteen-inch propeller. In identical conditions but using a twenty-one-inch propeller, the engine will perform 86 revolutions to reach point B.

So for the purposes of our little experiment, we find that there is a differential of around ten percent in the rpm (revs per minute) requirements for the engine as a result of the pitch alteration.

It is a little like making a journey in a manual car using only first gear and then doing the same journey again using second gear but for our purposes, let’s examine the differences if we tried first and fourth gear.

The real world always has the annoying habit of sliding in a few variables, and in this instance, the most important variable is the propeller slip.

With a nineteen-inch or a twenty-one-inch propeller, the boat will move less than the propeller’s pitch because of propeller slip. And just to make this more complex, propeller slip is not constant.

So before we go any further, let’s get technical. The correct name for the propeller’s pitch is called the ‘Nominal pitch,’ and the difference between the nominal pitch and the boat’s movement is referred to as the ‘Slip’. If a boat fitted with a twenty-one-inch propeller moves nineteen inches through one revolution, the percentage slip is around ten percent.

Propellor slip can be altered by cupping the propellor. Briefly, cupping can be created in two directions, along the rake line of the propeller or along the pitch lines.

For our purposes here, you need to understand that cupping can influence the propeller’s performance in two ways. If you want to get additional information regarding cupping the propellor, follow this link: (https://www.mercuryracing.com/blog/prop-school-part-4-blade-cup.html)

The Pitch is not Constant 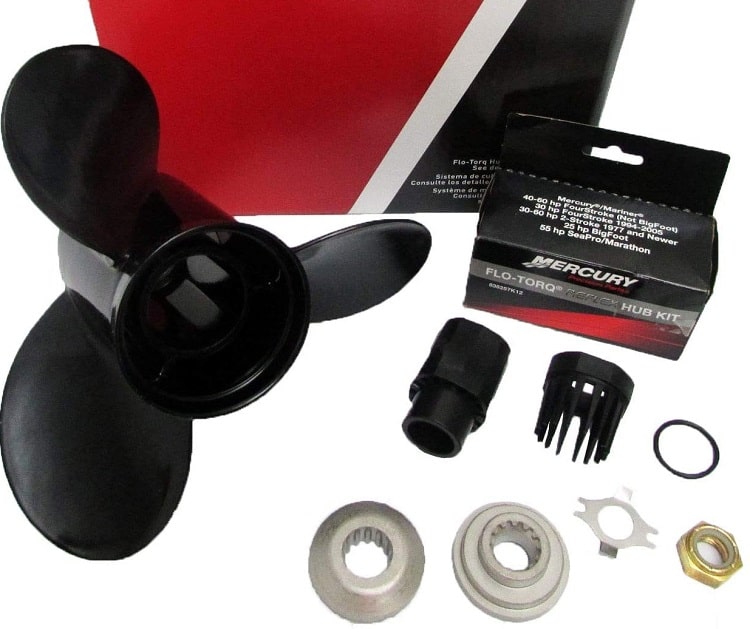 Propellers are sized and stamped with two figures. The first figure indicates the diameter of the propeller. The nice and easy one. It is simply the distance from one blade’s outside to the opposite blade’s outside tip.

That is if it is a four-blade propeller but, most small propellers are three-blade affairs. To get around this problem, measure the distance from the center of the propeller to the outside of one blade and double it.

The pitch is a little more tricky. The angle of the blade at the root area where it joins the hub of the propeller is a lot different from the angle at the leading edge. The average over the whole blade is calculated to overcome this problem of measuring a progressive pitch propeller. 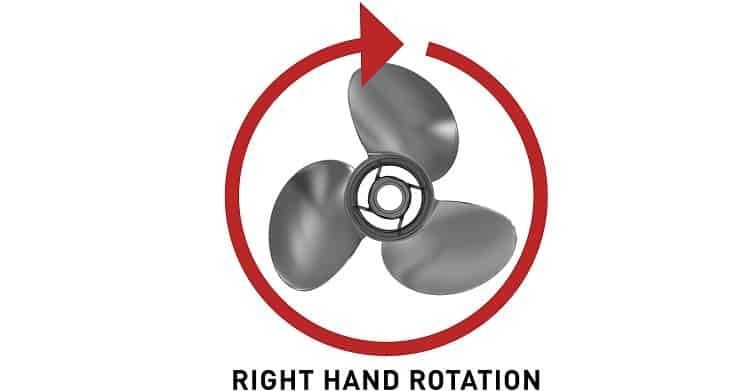 Let’s have a look at a fairly simple test you can carry out to discover which propeller is better suited to your boat and the type of performance you demand.

Before we get started, we need to establish the relationship between your present motor and the fitted propeller. You will need to establish the optimum range of rpm your motor performs at. These details are usually found in your operator’s manual. Essentially you are looking for the maximum horsepower at the lowest possible rpm.

The initial check involves finding the rpm at WOT (Wide Open Throttle) condition. Under this condition, if the rpm exceeds the manufacturer’s operating range, a larger pitch propeller would be called in to reduce the rpm to within the manufacturer’s parameters.

You will be able to reduce the rpm by between two hundred to four hundred revolutions by moving from a nineteen-inch to a twenty-one-inch propeller. By cupping the blades, a further reduction of around 200 rpm is possible. Hopefully, this will bring the WOT condition into line with the manufacturers’ range of optimum performance.

Let us have a look at the other condition where the rpm fails to get up to the required range. By using the same standards as we described above, you can easily establish how much the pitch should be reduced to increase the rpm into the acceptable range.

If your WOT condition is around three or four hundred rpm short of the range, then changing from a twenty-one-inch to a nineteen-inch propeller may just do the trick.

You may want to also consider the pitch ratio if you find that a shorter pitch propeller is required. Excluding high-performance boats that exceed thirty-five knots, the pitch ratio should not stray too far out of the range between 0,8 to 1,8.

Question: What is the Effect of a Larger Diameter Propeller?

Answer: The diameter of the propeller and the size of the boat have a constant relationship. The bigger the boat, the larger the propeller. A larger propeller is going to require more power to get it to spin, so a motor capable of producing more horsepower is going to be required if a larger diameter propeller is fitted. This is an important factor to consider.
Close attention is required to ensure that the propeller’s diameter allows the engine to operate within the power range provided by the engine manufacturer.
Another factor to consider is that the drag produced by a propeller is also proportional to its diameter. On many sailing yachts folding propellers are fitted to reduce the drag of the propeller while under sail power.

Question: What is the Effect of Moving the Propeller Deeper into the Water?

Answer: Workboats that travel relatively slowly benefit from a deeper propeller, but for recreational boating, where speed is an important factor having the motor too deep in the water is going to cause additional drag and reduce the speed of the boat.
In addition, the anti-ventilation plate fitted to outboard engines is going to create significant drag and could produce a lot more spray around the transom.
Having the propeller too high increases the risk of cavitation and negatively impacts the amount of slippage experienced. You will need to carefully check the depth of the propeller when you move from a nineteen to a twenty-one-inch propeller or vice versa.

Question: What Causes Cavitation in Propellers?

Chances are that the designers of the marine engine took some time to figure out the ideal propeller pitch at the time of manufacturing the engine.

The boat designers would have also done a fair bit of homework when they considered what the perfect engine and propeller would be for their design. So be sure that if you want to change from a nineteen to a twenty-one-inch propeller or vice-versa, you have checked things out carefully.

Changing propellers on an outboard engine is a relatively simple operation, and a little experimentation is quick, cheap, and simple. In these circumstances, I would say that if you are dissatisfied with the boat’s performance, then certainly pop on a different pitch propeller and evaluate the performance.

Perhaps sacrificing initial acceleration for a quieter, more efficient top speed performance is what you need. Alternatively, if you need lightning-fast acceleration, replacing a twenty-one-inch propellor with a nineteen-inch propeller may be just what you have been looking for.

On bigger boats with inboard engines and prop shafts that require to be dry-docked to get to the propellers, the replacement of propellers is a more considered operation. Be cautious and rely on the manufactures of the engines and the designers of the hull to guide you. Fluid dynamics and hydrodynamics are not for the fainthearted.

Archimedes may have discovered the water screw, which inspired Daniel Bernoulli to apply Newtons’ Laws to floating bodies and finally Joseph Ressel to design the first propeller.

Later the Propellor was successfully fitted to a steamboat by Francis Pettit Smith and Johan Ericson. But if you just want to make an adjustment to the performance of your boat, a short conversation with the professionals may save you a huge amount of frustration and money.